Plasma is very useful for electromagnetic experiments as it will easily react with fields and can alter phase of electromagnetic waves passing through it. The DIY Tesla Coil shown in the projects section was used to generate many of the images shown here.

Below is a collection of photos we’ve taken of various experiments involving plasma or high voltage and corona. The pictures are displayed via Flickr, for a larger view, click the image to open a new window. Many of these photos were taken using our Electrograpy Plates.

All images are copyrighted, do not reproduce them without permission. If you would like higher resolution images, or would like to use them for commercial purposes, please contact us. 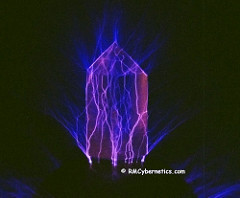 A Kirlian photo of a leaf taken with a digital SLR 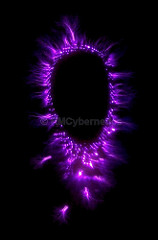 A Kirlian photo of a fingertip. 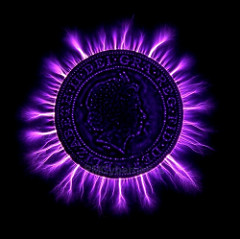 A Kirlian photo of a £2 coin. This time taken with a digital camera. 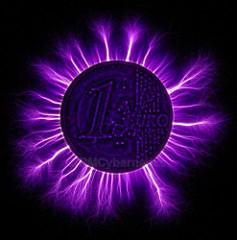 A Kirlian photo of a one Euro coin taken using a digital SLR camera. 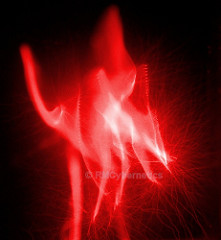 Just a picture of some Plasma squiggly stuff that has been altered to look red. 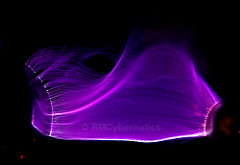 An arc of Plasma forming between a Tesla coil and a grounded metal sphere. The Tesla coil is using a very high spark gap rate for this photo 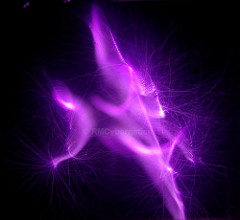 Some kind of ghostly creature made from electrical plasma 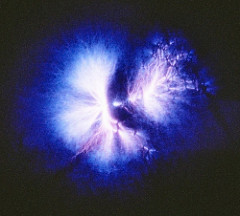 Kirlian Photo of paper smeared with a small amount of a eutectic alloy liquid metal The high voltage is provided by a small Tesla Coil operating with a very high frequency spark gap rate, and therefore lower voltage. This one looks quite different to the version using higher voltages (“Electric Veins”)

Kirlian Photo of paper smeared with a small amount of a eutectic alloy liquid metal.

The high voltage is provided by a small Tesla Coil and is therefore at a much higher voltage and frequency than a standard HV PSU. 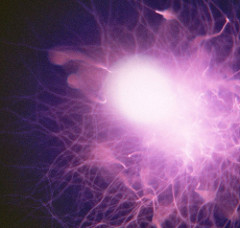 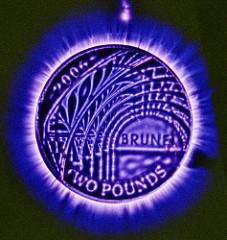 Kirlian Photo of £2 coin. The high voltage is provided by a Power Pulse Generator 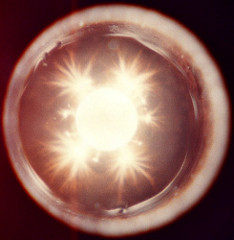 This shows a special device used to contain liquids so that there is effectively two ‘liquid electrodes’
A high voltage capacitor in a power pulse generator is discharged between the areas of liquid. You can see how the plasma spreads across the surface of the larger area of surrounding liquid.

Outer Space in the Lab 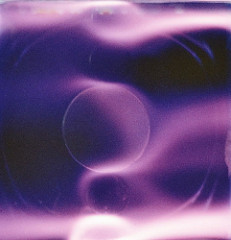 Magnetic Deflection of Plasma
The central circle is a large circular magnet placed under the special vacuum chamber. Two smaller magnets are above and below it in the image.
The high voltage AC electric field supplied by a power pulse generator is horizontal across the image, while the magnetic field is coming out perpendicular to your screen. 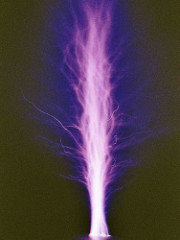 Arcs from the tip of a Laser Pointer 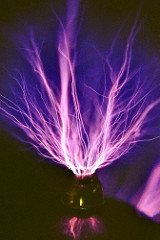 Arcs from a Tesla Coil with a small laser pointer lens fixed to the top. 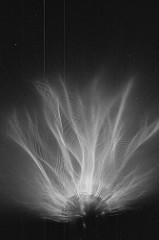 This is NOT a plasma globe. These arcs are in open air. Tesla coil discharge photographed using black and white superfast film. You are seeing Plasma Filaments emitted from a metal sphere of approximately 5cm diameter. 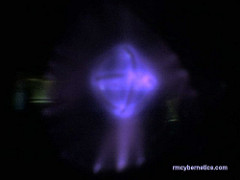 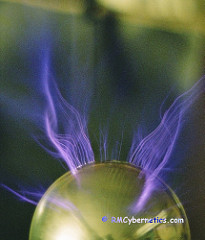 See the Experiments section for movie clips and more photos.